Jackson had been home for less than a week and he was ripping down the Trans Canada Highway in his mom’s 25 year old Mazda Miata roadster convertible. A whistle started at 80km. The radio was stuck on 95.5 and the car’s max speed was less than 100 kms/hr. Ok, this is a bit of an exaggeration but the car was definitely feeling more like an antique to be enjoyed with care as opposed to a roadster ready to take a corner on a dime. Sometimes in life we choose to take on projects that seem outlandish (even for us) and projects where we don’t necessarily know how we’re going to make them happen at the outset. This was one. We decided to buy Jackson’s parents a new car. 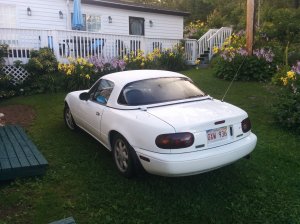 Jackson’s parents are two of the most generous people we know. They are kind and always pointing attention at others while expecting nothing in return. They are the perfect people to surprise because they are so not expecting it. However, it was also hard to gage whether they would accept a gift like this. It’s hard to buy things for people who are pretty darn on top of having all of the gear and tools for life. So, naturally, getting them something they already have just newer and better is a safer bet than a gift out of nowhere. So we started with replacing small things in their life that were a little worn out….a watch….a blender. That went smoothly. They were grateful, and there was no resistance. Jackson bought a new jackknife and his dad said it was cool and he’d like to get himself one. Jackson offered it to him. His dad immediately said, “no, no, I’ll get my own”. Okay so these tests left us still a little uncertain, but we were still hopeful.

We started by visiting a Mazda dealership and taking a 2015 Mazda MX5 for a drive, which are the Canadian versions of the Miata (his parent’s old Miata was bought in the US). We got to see the features, compare the different trim levels and talk with the sales people. We then starting hunting to see what was available in Canada. We knew we wanted it to be white with a manual transmission which the older one is too. We knew it had to be sleek but without a lot of jazz (lots of chrome, stripes, decals, etc). We found about a dozen worthy of consideration.

If you’re buying a car, consider the following. Always look at several different options so you get a gage for the price range and the various features that might be included. Create a chart/grid of the various aspects of the car so you can compare the different ones you’re considering. We included the following headings:

body (any extra bells and whistles)

We took all of the information we had on each car and fit it into the chart so we could compare easily.

We set aside 4 hours one afternoon and called around to each of the dealerships letting them know we planned to buy a car that day so we were looking for their best price. They always needed to talk to their manager and call us back so it took all afternoon to get the best price on each. We lowered it down to 3 options and then slept on it. We decided to go with the top trim level in a 2014 model as opposed to the mid trim level 2015 model. We also found one that was a demo. Demo means a Mazda rep drove it around to promote the model so this one had 7000kms on it.

There are lots of ways to get the best deal on a car. These are the ones that made the most difference for us.

End of the month – most dealerships work on monthly stats so when it’s the last week of the month, sales people are typically very motivated to sell.

Financing – most dealerships give bonuses if you can pay cash (or find your own financing).

Trade in – this is something we considered since we had a 2010 Mazda 3 that we didn’t need anymore. You don’t really make good money but it can save you the hassle of having to sell on your own. We actually got a low offer from the dealership. We thought we could do better so we put it on kijiji for sale and sold it at a way better price in just 5 hours.

Late in the season – since the car is a roadster and fall is just around the corner, it’s a good time of year to negotiate a bargain. Also, the new 2016 models (a total overhaul of the design) were coming out later in the summer, so dealers were really motivated to get the old models off the lot.

Having multiple options – considering various options means you can cause a little competition between the players to try to sweeten the deal.

Incentives and rebates – dealerships give rebates on anything from paying cash to being a recent college graduate to already owning a car from their brand, so make sure to ask.

Keeping the secret was the hardest part. We checked in with Jackson’s brothers on their ideas about buying the car and the reveal. It was cool to have them involved. We got advice from a few friends, but mostly it was a secret. We wanted them to be shocked. We picked it up from Montreal and drove it back to Fredericton. We got a huge bow made and parked it near their house…but not too close. There is a trail that runs behind their house so we parked it behind some bushes at the trail head opening about an 8 min walk away. One of our friends hid in the bushes to capture some pictures. It was a hard go to get them to go for a walk, but we finally got them out with a story about having a cool idea to pitch to them. We were walking along to the trail head opening  as the flies got worse and Jackson’s dad started losing interest in being out at dusk. We coerced him to walk just a little bit longer (all the while trying not to be too weird or suspicious).

As we walked out past the car, Jackson’s mom declared “Oh, someone’s getting a gift”. Then she saw our friend in the bushes. Then she said “wait, did you guys buy a car….where’s mine (giggle)”. Erin said, “this is yours” and Jackson handed her the keys. She kept saying, “I don’t understand” over and over as we explained the featured and showed them how the automatic top goes up. Jackson’s dad said “I also don’t understand but I’m getting in that car.” He handed Erin his rubber boots and got in (he didn’t want to get the new car dirty with his boots). Still in shock and mid sentence, they ripped away. We laughed like crazy. 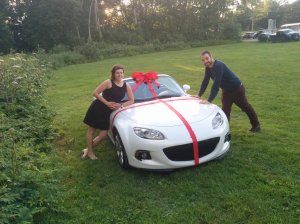 We saw them out in town an hour later. 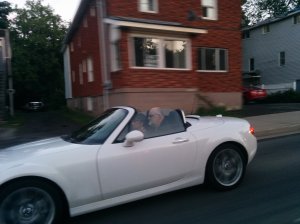 They sent a text saying “How did you know this is exactly what we needed in our lives, when we didn’t even know? We’re going for a drive around the dam. Don’t wait up.”